Unless you recently had an experience like Mark Watney, and have been off-planet a while, you have heard that the $1.5 billion Powerball jackpot – the largest lottery prize in history – was won on Wednesday and will be split three ways. The ‘lucky’ winning tickets were sold in Munford, Tennessee; Chino Hills, California; and Melbourne Beach, Florida, according to state lottery officials. The odds of winning the record jackpot were a staggering 1 in 292 million.

How much did the winners receive? The Tennessee family has elected to take the lump sum. After taxes, they’ll receive $187.2 million. 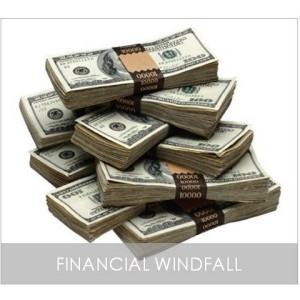 What would you do if you had won the most recent Powerball lottery? Or the next? What would you do if you were fortunate to receive any significant financial windfall? I have often wondered what I would do if a generous billionaire, a Bill Gates or Warren Buffett, gave me $500,000. Or maybe $1,000,000? While I am sure I would not have known what to do with it 12 or 13 years ago, I absolutely know what I would do with the money today. Being financially literate is not something that comes with a financial windfall. It is something that should be attained while you are working toward achieving financial freedom; and it is knowledge that will serve you well should you be lucky enough to stumble into a financial windfall.

I remember hearing various stories of his tribulations over the years; and I recently read a “where are they now” story of Jack Whittaker, winner of the $314 million Powerball in 2002. At the time, it was the largest lottery jackpot in history. Within six years of winning the lottery, Mr. Whittaker had been robbed multiple times, lost a granddaughter to drugs, lost a daughter to drugs, been sued, been arrested for a DUI, and his wife had filed for divorce. His story would seem to validate that money itself does not guarantee happiness or endow common sense.

Perhaps not surprisingly, Mr. Whittaker is not alone. The National Endowment for Financial Education, a Denver-based non-profit, estimates that about 70% of those incurring a financial windfall lose the money within a few years.

Before I became financially literate, I would have done what most people would probably do with a financial windfall: buy a new luxury car – or two, buy a new house, buy new cars for siblings, buy a house for my parents, quit my job, and on and on. Now? While I would certainly consider some of those things at some point, I would not do anything initially. That is right. I would not do anything with the money for at least six months – one year.

After all, my wife and I live comfortably, my mother lives comfortably, and there would be absolutely no reason to act hastily. I would not quit my job. While I do not know the exact windfall that would prompt me to quit my job immediately, it would have to be significantly more than $500,000 and probably more than $2,000,000. During that six month – one year period I would conduct a thorough review of my portfolio and carefully assess how to incorporate the new money into my retirement plans.

Would you immediately buy cars and houses for yourself and family members? Would you buy a few small things but wait for some period of time before making any major purchases? Would you not make any purchases for a designated period of time? Would you engage the services of a financial planner?