I don’t know about you, but over the course of the last year or so I have heard a lot of chatter about the connection between money and happiness. Actually, there have always been discussions about the connection between money and happiness. We are all familiar with the phrase, “money can’t buy happiness.” Is that true? More specifically, it seems to me the recent discussions have been about attaching a specific dollar amount – in the form of annual household income – to happiness.

A quick search led me to an article I read last year on the topic. The article referenced a 2010 Princeton study by Daniel Kahneman and Angus Deaton. The study found that at the national level, making more than $75,000.00 per year does not significantly improve your day-to-day happiness.

Using that $75,000 as a benchmark and conducting a more detailed analysis – you can get more specific details on the numbers here – Doug Short, vice president of research at investment group Advisor Perspectives, concluded that the $75,000 is probably a reasonable national benchmark. However, he suggests how much you need to get to that [happiness] threshold really depends on where you live.

The infographic below, created by Jan Diehm for the Huffington Post article, illustrates the threshold for each state and the District of Columbia. If you are interested in the mean (average) and median like I was, I’ve got you covered and have already done the math. The mean is $78,105.69 and the median is $73,950.00 (West Virginia); both pretty close the $75,000.00 benchmark. 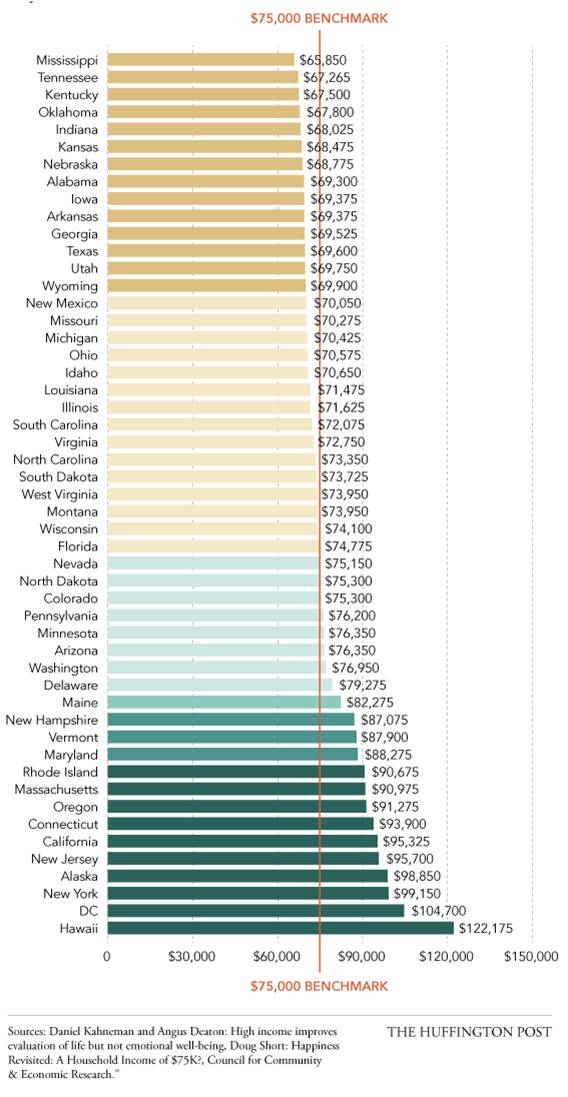 One of the things that was being reported when this study first appeared was that, “money does not buy happiness after $75,000.” If you read the Princeton study or review the analysis by Mr. Short, a more accurate reading is that your emotional well-being (your day-to-day happiness) doesn’t get any better for the typical American household after earning $75,000 annually – slightly lower or higher depending on exactly where you live. However, what Kahneman and Deaton call life evaluation – how you feel about your life and accomplishments – can continue to rise with higher income and education levels.

Personally, I have always been a very happy individual, even when my household income was substantially less than $75,000 annually. I believe that is due simply to my personality and the fact that I have enjoyed great physical health.

My own take is that happiness, or life evaluation, does continue to increase with income levels, in large part because having money often equates to having more and better choices. And one thing I know for sure, I haven’t gotten any less happy as my income, and retirement portfolio, have steadily increased.

What are your thoughts on the connection between money and happiness?